I remember receiving a message from my friend one fall evening – she let me know that after 4+ years of trying to conceive, they were at last pregnant! My emotions tasted like grapefruit, for some of what I felt was purely sweet and thankful that at last they could be blessed in this way, but I also tasted the bitter sour and couldn’t quite put the negative feelings into words.

We messaged back and forth a bit that evening and then she said this – “I’m sorry if this news causes you pain. I know it did for me anytime someone else was pregnant. It always kind of made me feel like I was being left behind or overlooked. It’s like the other person in your boat found a rescue boat and left you behind….Just wanted to let you know that I love you so much and haven’t forgotten you on this journey!”

Exactly, my friend. She described exactly what I couldn’t put into words. I felt alone. I felt joyous for her and in some ways encouraged that if it can happen for them, it can happen for us! Yet, she got rescued from the sea of infertility and I was still floating around wondering how, when, ever? The not knowing can make your head spin. But her words – You are not forgotten – stuck with me and she continued to be a support to me. Thank you sweet friend.

You, dear reader, if you are in the sea of infertility, you are not forgotten. You are not alone. And if this is the point at which you choose to stop reading this blogpost, I totally get it. Know that I am still praying for you and hoping for you.

It was a Friday evening in late April and I was feeling rebellious, which means I was staying up later than usual. Manbeast was in bed and I was in the home office plucking away on the ukulele. I had no intentions of writing a song, but as I strummed through the few chords I know, my heart felt stirred to sing about the ache I felt. I began to sing about how much of a surprise it all was. I never expected infertility to be part of our lives. I sang about the hopeful first days when we first started trying. I sang about the current days we found ourselves in where our hearts just ached more and more with each oh so regular and predictable cycle that amounted to nothing. And then I began to hum and ooo through some angsty minor chords because so much of what I felt was hard to put into words and this was the spirit inside of me crying out. Then I felt something that brought me to tears. As I sang, I became very aware of just how much God was seeing me and knowing me in my hurt. He came to me in a special way that night and I felt Him holding me close – not in a physical way – but my spirit felt the comfort of His presence deeply. I didn’t receive a new word or promise or answer as to why we were in this from Him. I didn’t receive a solution or new plan of action. I simply received Him.

As much as I longed to hold our child, I realized that He wanted me to know that He hurts with my hurt and like an earthly father holding his children to bring them comfort in their time of need, God my Father was holding me.

How glorious. Thank you Father.

About three weeks later, I received an email from a church leader inviting worship leaders to submit an original song to be considered for the “Songwriting Showcase” that was scheduled for early June. We would have the opportunity to share a song with our church family and worship Him together as we celebrated the creativity He was pouring out through us. I submitted my song about infertility that poured out in the home office that late April night. I told the leaders that if this song was perhaps a little too personal in nature and not fitting for what they wanted that evening, it was ok for me not to sing it. It’s a super vulnerable song.

Meanwhile, a week had gone by and I noticed that I was a couple days late. The predictable cycle that always felt like someone giving me the middle finger hadn’t arrived. But this wasn’t unheard of for me so I remained pretty calm. Monday morning rolled around and still no middle finger 😉 I was growing curious. My body felt weird too. I had been bloated and uncomfortable for almost 24 hours and I knew I hadn’t recently eaten any lentils 😉 On my way to go teach lessons at the junior high that morning, I stopped by the Walgreens and bought one pregnancy test. I had stopped buying these or keeping them in stock long long ago as it felt like a waste of money when I could just wait for mother nature to come on its own and deliver her news.

I was so antsy. I kept thinking – ‘Don’t get your hopes up. You are only a couple days late. It’s probably just a weird cycle for you. Double check by taking the test, but stay positive if the test is negative. We’ve just seen the fertility specialist and there are some affordable options we can try if we want. We also just heard that great fertility talk from the health guy and we can do that cleanse and reset our bodies this summer, blah blah blah…crap, this is gonna hurt if it’s negative again.’

I sat in the bathroom stall at the junior high. What a lovely setting for this, but I simply couldn’t wait. Tick tock tick tock. I stared at the white speckles on the black bathroom stall door. A minute had passed and I casually glanced at the stick, even though I had another minute to wait. I could already see a faint line indicating positive. I began to shake. What? What???!!!!!! I waited until the two minutes were up and picked it up to see the positive sign as clear as day. I was flooded with so many emotions. I was shaking all over and crying with joy.

And then I realized I had two minutes to gather myself together and go teach a few voice lessons, all the while pretending everything was normal. That was difficult

– As soon as I got home, I went to Manbeast’s office and showed him the stick. Laughter, joy, jumping up and down ensued. It was surreal. 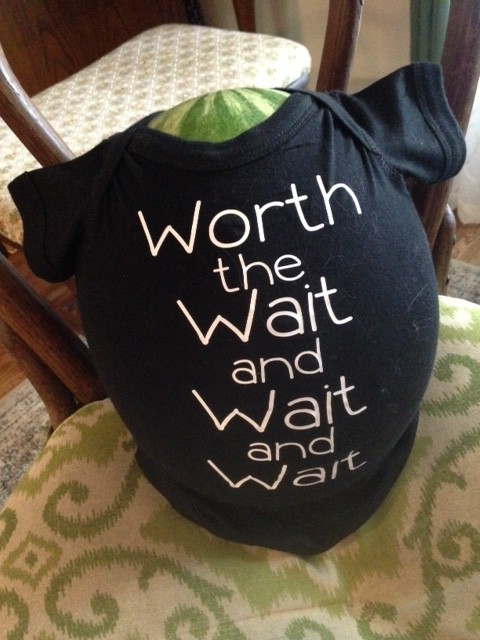 Two days later, I received an email back from the worship leaders. They loved my song and wanted me to sing it at the showcase. I was thankful that I could share about this trial through song and prayed that people facing any sort of hope deferred could be blessed by it and remember that God sees them in their pain. Yet, I also felt like it would be sort of weird to sing about this now knowing that I was pregnant. Should we share the good news with our church family? Singing this song now felt kind of awkward for me. Beast and I talked about it, and while we didn’t intend to share this news in such a public way so soon, we felt like God orchestrated all of this to happen on the timetable that it did for a reason. It was no coincidence that shortly after I wrote this song, and also submitted it to the showcase that I was now pregnant. We felt that sharing this praise would be powerful and meaningful for our church family and that we could also ask them to keep praying for us through our pregnancy.

I got lost in the song as I sang it for our church family that evening in June. Sometimes nerves and knowing that people are watching keep me from getting lost in the music, but this evening, I closed my eyes and drifted back into the home office where I poured my heart out to Him through song. When I finished, they applauded and I waited at the piano bench. I then shared our good news. I don’t think anyone expected that twist. Our church family ERUPTED in praise. It was a glorious moment to see some jump to their feet. Hands were raised high. Voices were crying out with joy. It was absolutely beautiful and Beast and I felt so overjoyed. They then prayed for us and our baby. This was one of the most powerful moments we had ever experienced. Praise be to God for the new life being formed within me!

The first few weeks of our pregnancy were simply surreal. It was hard to believe at times. I don’t think I fully processed it for a while. It was and is hitting me in stages. As we told family and close friends, the words still felt foreign as they came out of my mouth. Yet, I could feel my body changing – mostly I just felt a bit crumby – but I was so thankful for this. A life is being formed inside of me – each and every detail, a miraculous process. Simply amazing.

Beast and I talked about what was it that did it? What formula did we follow that finally gave us the winning ticket? We could speculate that maybe it was this or that, but honestly, we have no way of truly knowing. One of our pastors told us that shortly after his wife wrote a song of faith to the Lord about their fertility struggles, she got pregnant.

Personally, I think that song had a lot or perhaps everything to do with it. God inspired it. Something shifted in that place that night. Father came close and now Baby Mahan is on his or her way.

And did I mention that the song’s title is “Surprise”? I named it such because our journey of infertility came as a surprise, but low and behold, God knew He would be surprising me with a child so very soon….we think we actually conceived about a week and half after I wrote the song :)!

If you, my infertile friend, are still reading – I have no formula for you and I always found people’s suggestions that if you just do XYZ to be a little oversimplified and not necessarily helpful (despite good intentions). What I would say to you is this – do what you need to do. Follow your heart, your gut, Father God and wait for Him. He hasn’t forgotten you.